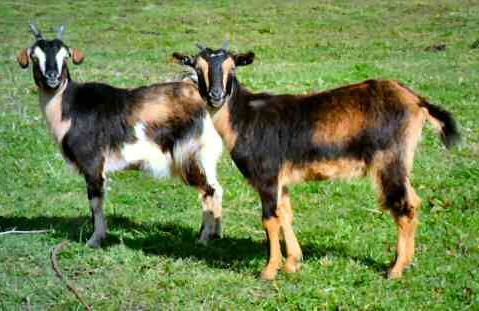 Goats are inquisitive animals with bags of personality, which makes them enjoyable animals to farm. As well as providing entertainment and companionship they can provide milk. Goats are fairly low maintenance animals to keep, however they do have some unique nutritional requirements that need to be taken into consideration.

Goats are classed as ruminant animals. This means that they are able to get nutritive value out of higher fibre plant matter, due to their complex digestive system consisting of four stomach compartments. Although goats are ruminants like cattle or sheep, they do have quite different feeding behaviours and are classed as browsers rather than grazers. Goats have an innate drive to seek out feeds other than the pasture that’s in front of them. They like to browse for feed in trees, shrubs, bushes and they also like to eat weeds. This explains why they seem to gravitate towards your favourite roses or destroy your vegetable patch – suffice to say, adequate fencing is a necessity when keeping goats! Goats like a varied diet and it’s worth exploring alternative forage mixes rather than typical ryegrass/clover pastures if keeping goats. It’s also a good idea to provide goats with some sort of concentrate feed option such as a pelleted goat feed, as this again increases the variety of the diet and also helps to prevent mineral and vitamin deficiencies. Goats seem particularly prone to iodine deficiency and in New Zealand our soils are already low in iodine in most areas, so it’s a good idea to supplement goats with a feed that contains iodine. For lactating goats, more attention needs to be paid to the diet in order to optimise milk production and animal health. Lactating is a demanding physiological state and feeding a pelleted feed to a doe can help to lift the total energy of the diet as well as delivering micro minerals, macro minerals and vitamins, which are vital for milk production.

Do you think the easiest way to keep your verge tidy might be to get a goat?  Don’t be fooled – it takes a lot of time and effort to look after a tethered goat properly. Many of the people who tether goats genuinely think goats are tough creatures that will eat anything, but in fact they are remarkably fussy eaters, and they have a miserable life for many reasons.  They usually have insufficient food and water, they are always lonely, they are often cold and miserable, and they are very much at risk from vandals, dogs and vehicles.

Goats must have good shelter

Goats don’t have a layer of fat under their skin as sheep do, and their coat is not greasy like wool so it’s not so waterproof.  For these reasons they really suffer in cold wet weather.  Tethered goats are particularly at risk from the elements, and they must be provided with a robust weather-proof hut. Don’t forget to clean the hut out regularly if it has a solid base or move it frequently if it hasn’t. Goats will spend a lot of time in their shelter when the weather is bad and it will get very dirty inside!

Goats must get fresh browse or pasture every day and they are surprisingly fussy eaters.  They may have a good appetite for young trees and the growing tips of expensive plants, but they don’t like soiled food.  The grass that grows by the roadside is often dusty, oily and rank.  It is not good feed unless there is plenty of it and the goat is moved frequently. Tethered goats need to have clean water available to drink at all times, especially when conditions are dry.  The water container should be secured so that it can’t tip over easily.

Goats are intelligent social creatures, and they really like the company of other animals and preferably other goats.  Solitary goats will be lonely. If a goat is to be tethered, it should be very tame, preferably hand-reared, and it should be given a lot of attention.

Their general health is often neglected

Like sheep and all other goats, tethered goats may need anthelmintic drenches to get rid of internal worms.  Your vet will advise how often you should drench them. Their hooves should be trimmed at least once a year, and sometimes more often if the horn grows rapidly. Angora-type goats must be shorn every year, preferably in spring.

If you need to keep the verges tidy, it would be better for all concerned if you used a scythe or a lawn-mower rather than a tethered goat.

For centuries, the young of a goat have been called kids. It wasn’t until the 1800’s that the word kid was extended to children.

Kids most commonly arrive as twins. Sometimes just a single, but often triplets are born. Quadruplets occur occasionally, and a few times we’ve had quintuplets!

Goat kids learn to stand within minutes of being born.

Kids begin climbing and jumping off tree stumps and bales of hay when they’re just a week old. At two weeks old, kids are fearlessly agile, running and leaping for fun.

Like human kids, goat kids like to snuggle. The “kid pile” is a common sight in the barn nursery, as they curl up with with each other for companionship and warmth.

Kids use their lips to learn about the world around them. Intelligent and curious, they love nibbling (not eating!) just about anything around them.

The vocal sound a goat makes is called a bleat. Mother and kid goats recognize each other’s calls soon after the mothers give birth. Goat kids also bleat when they’re excited to see their caregivers at feeding time.

There are approximately 450 million goats around the world.

Goats are known to be intelligent, curious animals with an inquisitive nature, hence why they explore and investigate unfamiliar surroundings.

Goats’ pupils (like many hooved animals) are rectangular. This gives them vision for 320 to 340 degrees (compared to humans with 160-210) around them without having to move and they are thought to have excellent night vision.

Goats are herd animals and will become depressed if kept without any goat companions. So, it is unhealthy for a goat if a family just owns one as a pet. 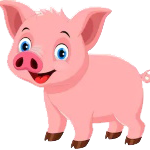 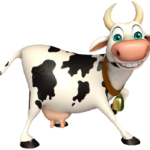