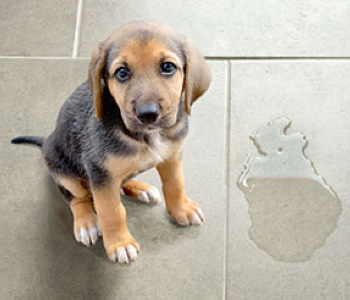 While it might not be the most glamorous side of puppy parenting, toilet training is one of the most important behaviours to teach your puppy.

In the wild dogs don’t have a ‘house’, but they do have a den, where they will not toilet after seven weeks. Before that, Mum deals with the mess naturally. It is instinctive for them to want to toilet outside, so we use that to our advantage. Replicating the natural environment at home at the same stage it would happen in the wild will give you the best results.

The key principle we use is texture discrimination. This means the pup will be encouraged to toilet on a certain surface or material, like newspaper or grass. Here is three methods of house training; some are better for people with limited outside access or a dog door, time, etc.

Method 1 is to use a substrate, like newspaper, in a small fenced area (a puppy pen) with the bed in one corner. In the ideal world, this pen would be by the back door with ready access to the lawn. The entire floor in the pen must be covered in newspaper for the first two weeks the pup is home; after that time, you will start to shrink the papered area down to one corner of the pen over another week. By now the pup will have learnt that is the correct surface to toilet on, and we can start to move the paper outside of the house. Preferably you would have a dog door or another access point for the dog to go out freely to toilet. You move the paper outside the dog door and then over the next week remove the paper entirely. Now the dog will be toileting outside on the lawn by choice. The home now becomes the dog’s ‘nest’ or ‘den’ and they will choose not to toilet inside. Keep in mind it is ideal for your pup to have access to a fully fenced outdoor area via a dog door or normal door, so it has the option to toilet outside whenever it is needed.

Method 2 is crate training. This is another great trick for toilet training your pup. The principle here is that by using the pup’s instinct to not want to toilet in its ‘nest’ or ‘den’, we simply create a contained nest for them – normally a small crate big enough for them to lie down comfortably. Pop them in during nap time and night time, and they will naturally hold on until you let them out. In the first few weeks you get them home, they will be able to hold on for 4-5 hours, so you will need to let them out once during the night, right before you go to bed, and as soon as you wake up. Pop them out regularly during the day to limit the chance of any accidents when you are not watching. If you do catch them in the act, it is important to rush over, grab them and calmly pop them outside on the grass until they have finished their business.

Method 3 is the pick and drop. This method is simply done, but requires someone who is around a lot.

The logic is that you put the pup outside whenever it would naturally need to go to the toilet. After feeding, drinking, playing, exercising and sleeping. Also, if you’re unable to supervise the puppy it would also be put outside. The idea is that the puppy learns that the only time it goes toilet is when it’s outside and therefore the house is the nest site. 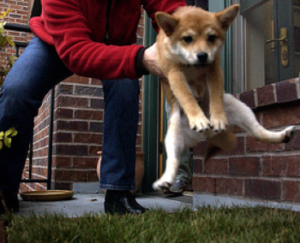 The very best way to house-train your pup is to use a combination of all three methods. This is done by using a puppy pen with a crate in the corner, newspaper on the ground, and ready access outside to a fenced area for the pup. Pop the pup in the crate for blocks of time to help them learn not to toilet in their nest and to learn to hold on as long as they can. This is done by crating them overnight. During the day when you are not watching, they can access the paper and ideally the outside, and if you’re around, pop the pup outside after all the appropriate times – like feeding and sleeping. By combining all three methods, you get a quicker success rate and more consistent learning from the pup.

Once the pup is going to the toilet outside on its own, and every time you can systematically start opening up the house to your pup one room at a time (making sure they don’t start toileting), in a few days give them access to the next room. This will ensure they maintain their pattern of toileting outside. Remember to always give your pup the chance to go outside; if they have to go inside they will do so, so don’t blame them for that. NEVER growl at your pup or rub its face in its urine or faeces, as this will only confuse and scare them. If you catch them midway through toileting, just pick them up and pop them outside calmly and encourage them to continue on the grass.

Puppies will need your help to learn where to relieve themselves. It’s very important you create a toilet routine and stick to it. Take your puppy to the toilet area at these times, remembering they may go around a dozen times a day:

As soon as they wake

After playing or eating

After being in their crate In time, your puppy will learn where is okay to go.

Do Keep an eye out for signs your puppy may need to go, including turning in circles, sniffing the ground or whining.

Do gently redirect them to the right place if you find they have gone to the toilet in the wrong place.

Do use puppy training pads from day one of toilet training.

Do give them lots of praise and reward them for going in the right place.

Don’t get angry at your puppy if you find them going to the toilet in the wrong place or if they have a little accident.

Tip – Taking your puppy to the toilet on a lead lets them know it’s business time and will help teach preferred areas of the garden to toilet in!